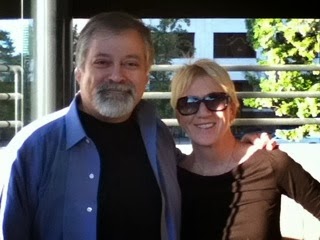 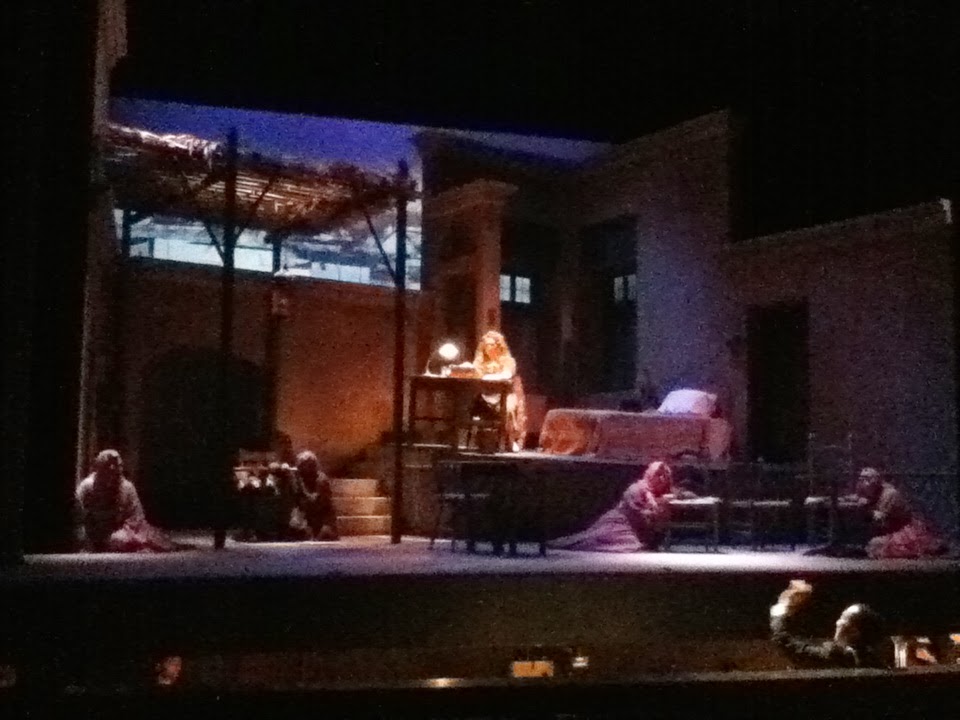 This fall the Moore Fund provided composer Juhi Bansal with a grant to attend the production week of the college staged premiere of Daron Hagen's opera, A WOMAN IN MOROCCO. The work had its premiere on October 25, 2013 at the Butler Opera Center at the University of Texas, Austin.

Thanks to Mo. Hagen and Mo. Kelly Kuo at the Butler Opera Center.
Posted by Michael Ching at 11:46 AM No comments:

A mini Moore for Leanna Kirchoff

Leanna said "It was great to see the work twice and to have time to talk to Craig and Steven about the process from creation to performance.  Craig's music has such a great emotional range and it is always contributing to the story, rather than being merely accompanimental.  He played for both performances, which was impressive, as the music was difficult in many spots!"

Leanna's work was featured at the John Duffy Composers Institute at Virginia Arts Festival in Norfolk. She recently produced her opera, THE CLEVER ARTIFICE OF HARRIET AND MARGARET, in Colorado.

We thank Craig and Steven and Arizona Opera's Ryan Taylor for facilitating and embracing this visit.

Posted by Michael Ching at 2:07 PM No comments:

Douglas Moore's hometown of Cutchogue honors his memory every summer with a concert. Here are some pictures from that event, which took place on August 10th. 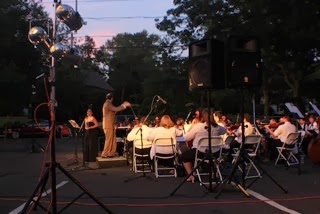 Soprano Stephanie Izzo captures the light from all angles as she performs "The Willow Song" from "Baby Doe."  Ben Arendsen conducts the Sound Symphony on the Cutchogue Village Green just a half mile from the waterfront cottage where Moore would compose when visiting his home town. 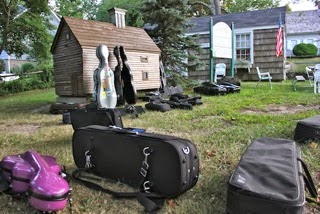 Historic buildings on the Cutchogue Village Green --- a scale model of the nearby 1648 Old House in the foreground, the early 19th century Carriage House just adjacent, and in the background, the early 18th Century Wickham Farmhouse.   --- stand unperturbed by the frantic bustle of musician preparations for the concert."


Pictures and captions courtesy of the Douglas Moore Festival board. More to come.

Posted by Michael Ching at 3:15 PM No comments: 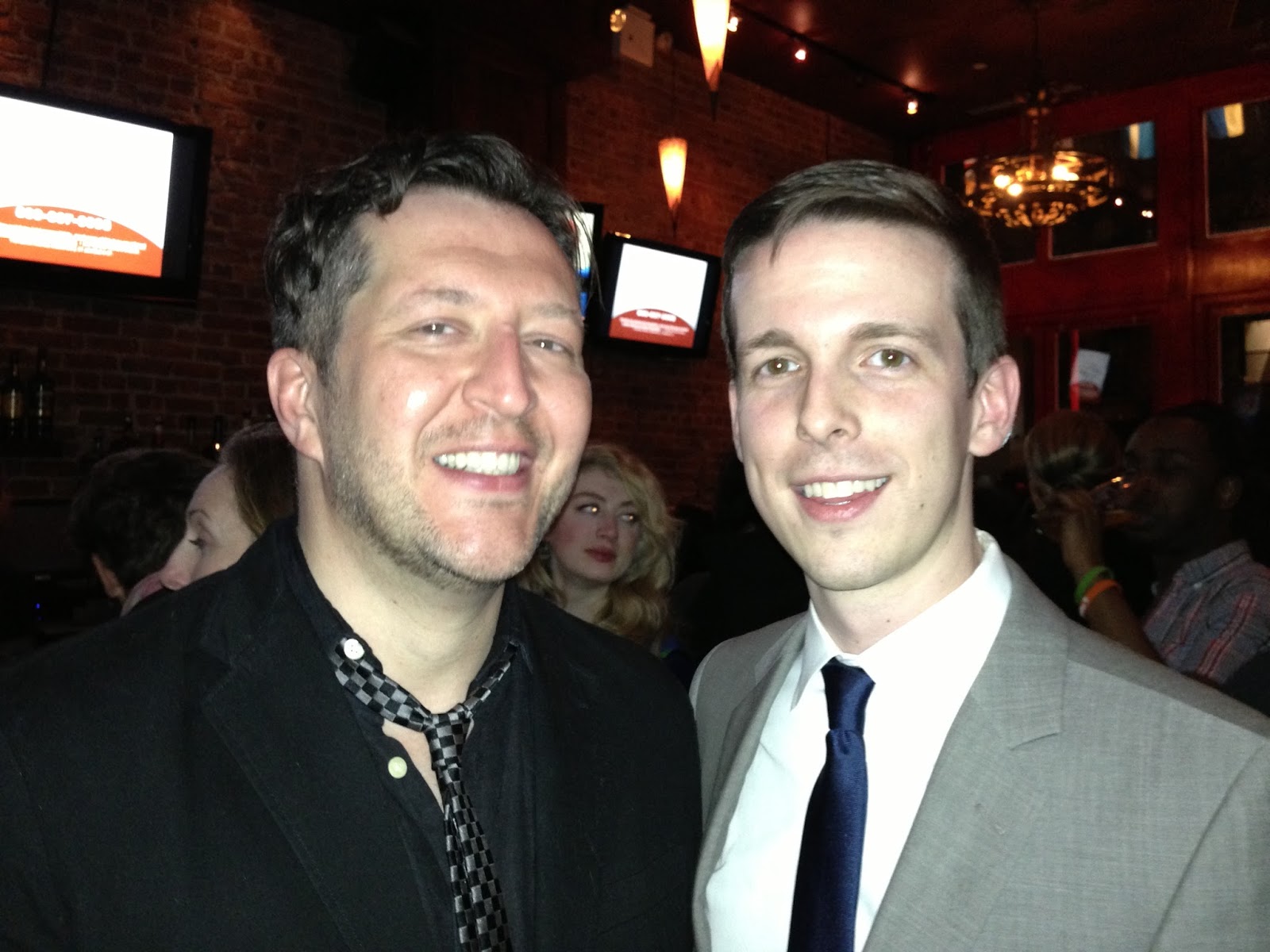 Congratulations to Zach Wadsworth who finished his Moore Fund fellowship year looking in on the RING at the Seattle Opera. Here here is pictured with composer Thomas Ades. 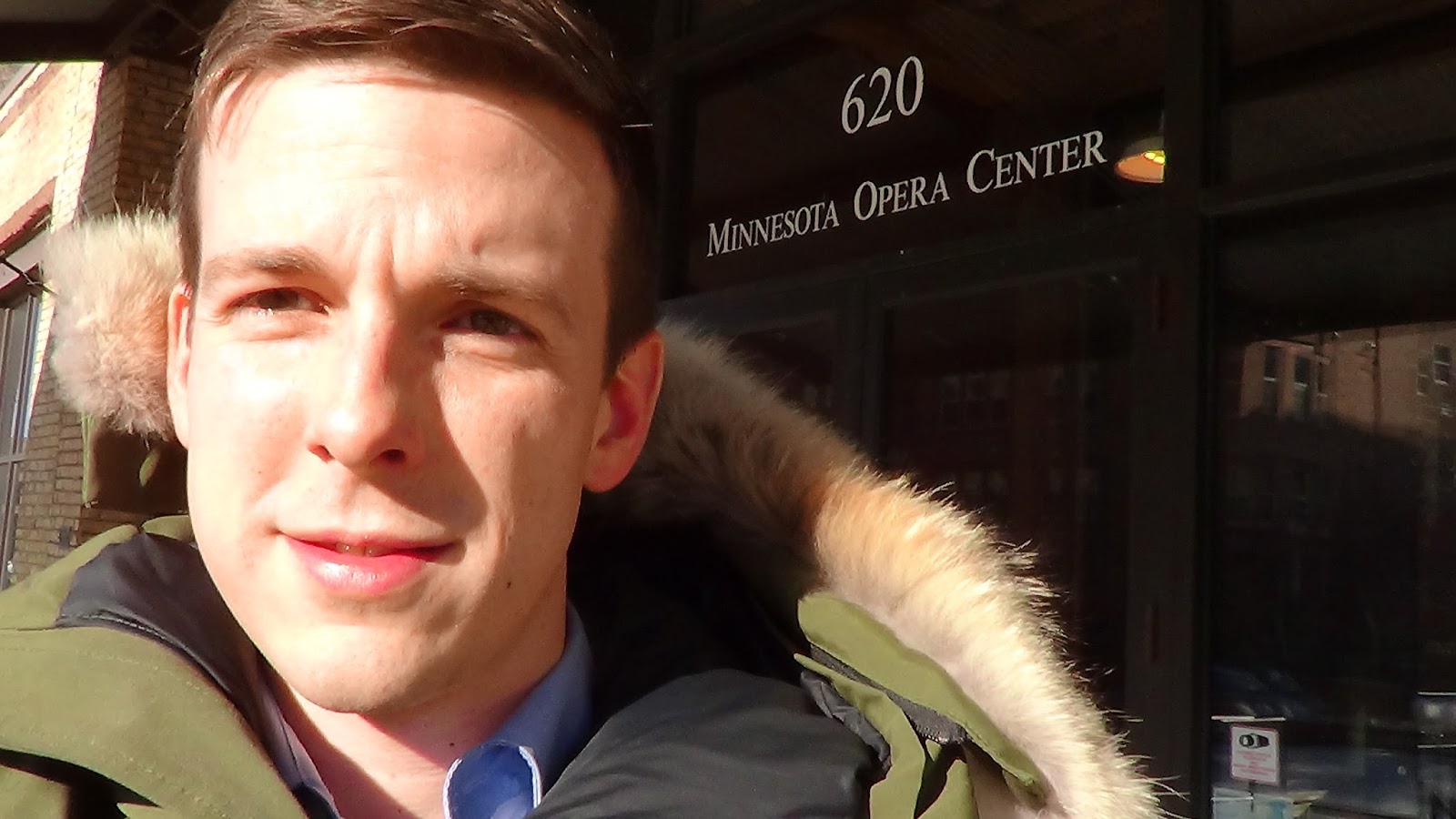 And here he is at the Minnesota Opera, where he observed rehearsals and performances of Douglas Cuomo's operatic version of DOUBT.

The board of the fund is looking at how best to continue its activities--whether to remain focusing on a single fellowship or perhaps to branch out into shorter length ones or other activities related to the development of opera and musical theater composers.

Posted by Michael Ching at 4:39 PM No comments:

Here's a nice interview conducted by Brian Kellow in the new Opera News with our board member John Kander.
Posted by Michael Ching at 10:55 AM No comments: 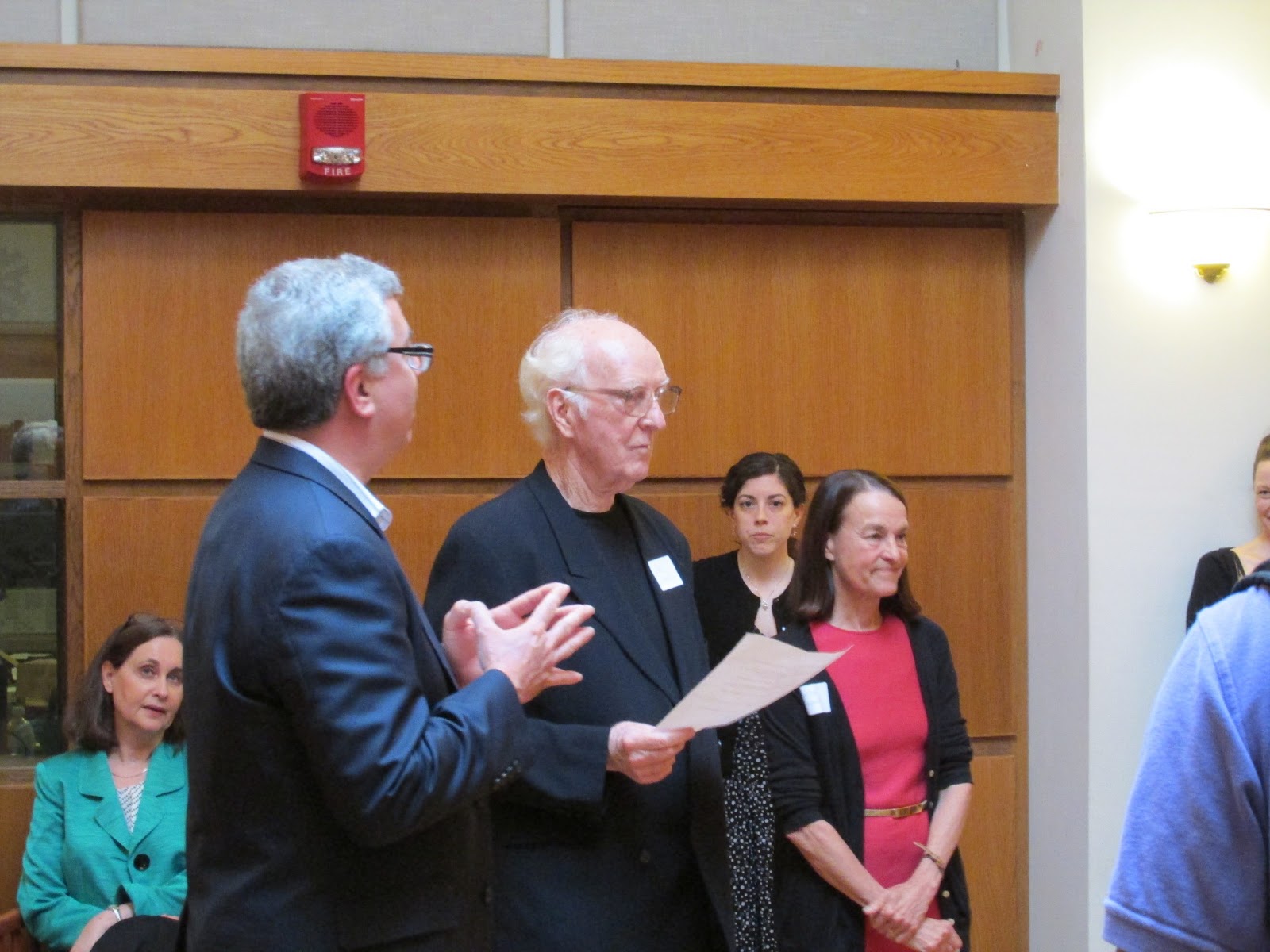 John Duffy and Libby Larsen, with Rob Cross (left) who is the director of the Virginia Arts Festival.

Last month, I got the chance to work with six composers who were fellows at the Duffy Institute. Named after John Duffy, the institute provides composers with the chance to hear their work performed by a group of talented and flexible singers very well selected by Alan Johnson, who serves as music director of the project. Libby Larsen is also there in-residence to provide commentary and continuity along with a variety of guest composers who stop in for a few days during the two week period.

The Duffy Institute is part of the Virginia Arts Festival and takes place at Old Dominion University. With this institute, John, who is well known both as a composer and as the founder of Meet the Composer (now part of New Music USA) has really made an impact on the training and nurturing of music theater creators.

What excited me about the institute was the variety of composers and their styles, from very contemporary to very musical theater. It certainly strikes me that composers from both fields deal with similar problems--plausible and compelling musical storytelling. And there are marketing challenges--how style is perceived by the field and how to navigate a business that tends to define, label and pigeonhole. There were composers who were clearly writing contemporary new music opera, some clearly writing Broadway musicals, but a couple who were exploring territory in between. I was so pleased to see that kind of variety--John told me that the fellows were deliberately chosen to reflect a diversity of styles. As were the guest composers--Charles Wourinen came in after I left.


Posted by Michael Ching at 4:39 PM No comments:

“Nude supers to the stage, please.”

Out they walked – two dozen unclothed men – onto the stage of the Brooklyn Academy of Music. They were the “Corps of Lovers” in the New York City Opera’s 2013 production of Thomas Adès’ Powder Her Face. And they, in their bold, silent nakedness, were the topic of giddy conversations during intermission, on Twitter, and in all of the opera’s reviews.

These men are found nowhere in Adès’ score; they were an invention of stage director Jay Scheib, inserted into the opera’s most famous scene as a ghostly reminder of the main character’s many past anonymous romances.

Scheib’s decision was, without doubt, a coup. First and foremost, it was an artistically bold choice – the parade of bodies avoided burlesque bawdiness, instead combining in a haunting tableaux, silent of voice but damning in presence.

But nowadays, operas can’t thrive on artistry alone, and the “Corps of Lovers” also proved an irresistible topic for media (it even made a splash in British tabloids) and an undeniable draw for audience members, who flooded the lobby on opening night, delaying the curtain by 20 minutes.

In an orange-and-brown high school classroom in Richmond, Virginia, my first choral composition was sung for the first time. It was 1999, and I was a keen, bright-eyed 15-year-old beginner. The piece was entitled Silence of the Night (on a poem written by my piano teacher), and I passed out handwritten copies. My generous choir director, Dwight Graham, played the piano as my fellow choristers sang.

About ten bars into the piece, the sopranos were told to sing a high B-flat on the word “see.” Where I had hoped for a glorious, ringing tone, a primordial squawk emerged.

We finished singing, and I walked around the room to collect my copies. I approached the soprano section expecting florid apologies for the fumbled high note, but was instead met with silence. In their eyes was a white-hot rage that communicated a single phrase: “Never again.”

Today  Hunter College Opera Theater performs Jack Beeson's one act opera, DR. HEIDEGGER'S FOUNTAIN OF YOUTH. Jack was one of the founding board members of the Moore Fund and a close friend and colleague of Douglas Moore. There is a lovely recording of the opera. 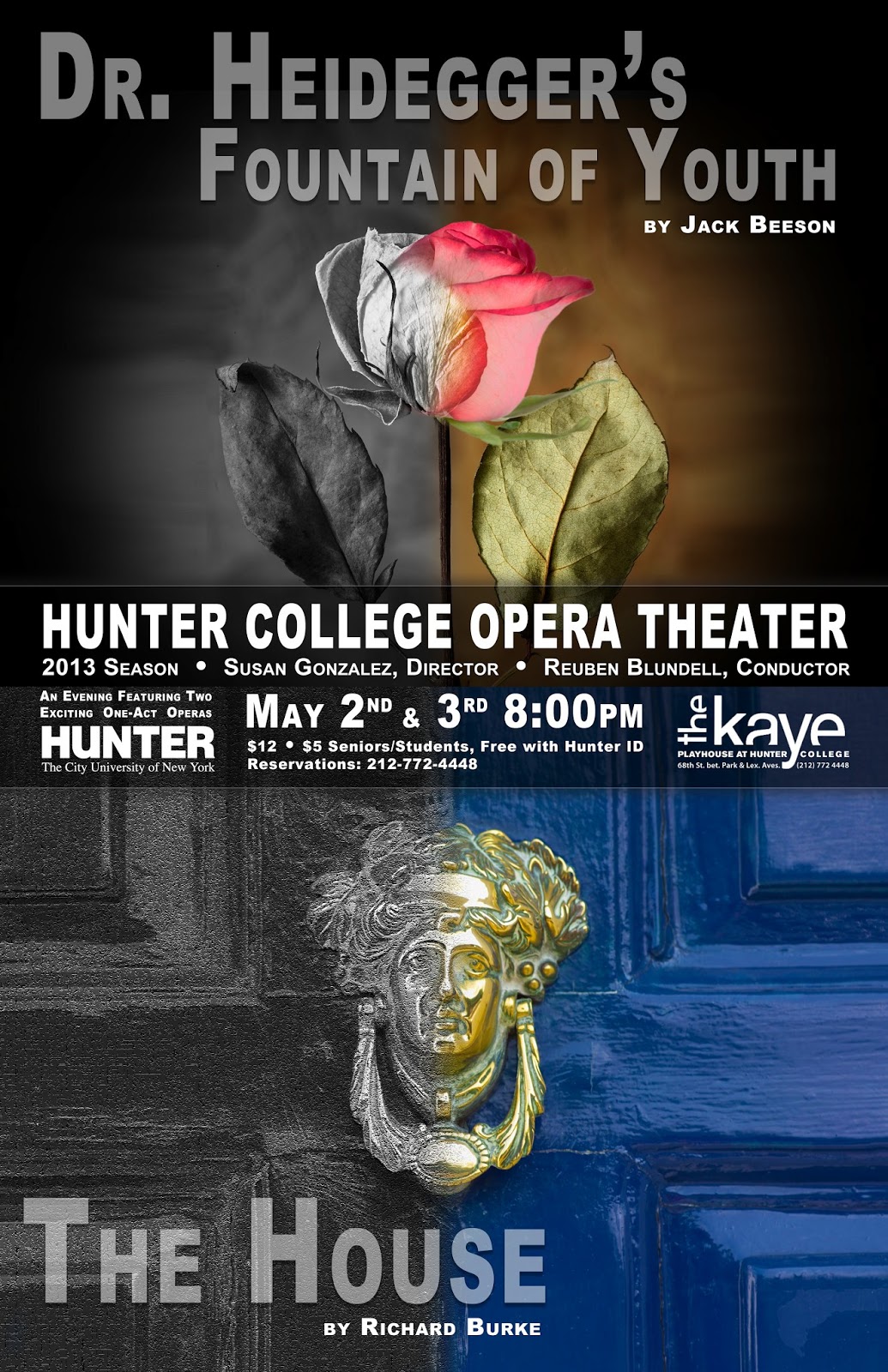 Posted by Michael Ching at 11:03 AM No comments:

Road Report #2: The state of the art form

Premature declarations of death have become a modern comedy cliché – think of Monty Python’s classic “Bring out your dead” skit, or Will Ferrell’s hilariously protracted death scene from the first Austin Powers movie.

We like it when people jump the gun, and we laugh when the down-and-out bounce back and refuse to go quietly into that good night.

And so it gives me great pleasure to write that modern opera, despite the doomsday claims of many, is healthy and thriving.

I’m sitting in an opera rehearsal, and I catch someone’s eye. We introduce ourselves, engage in the usual pleasantries, and then comes the inevitable question: “So, what do you do?”

Most people in the room don’t have a hard time answering this question. They’re singers, stagehands, conductors, choreographers, or even wigmakers. Their roles are clear, and their presence is justified. But when I answer, “I’m a composer,” my interrogator’s brow furrows, and more questions follow.

“Do you compose operas?” Yes, I’ve written one.

“Are you writing us an opera?” Not right now, but I hope to eventually.

“Then what are you doing here?”

Congratulations to 2010-2011 Moore Fund fellow Dan Visconti for being selected one of the winners of the prestigious Rome Prize competition. Here's a link to the story on NewMusicBox.
Posted by Michael Ching at 3:20 PM No comments:

Although the Moore Fund first funded a fellowship in '04-'05, it hasn't been up on the world wide web. We are in the process of getting a website DouglasMooreFund.org going and it will go live by the end of the month.

The website and blog will be of interest to aspiring composers and librettists who want to learn more about breaking into the fields of opera and musical theater. It will also be of interest to fans of Douglas Moore's work and also a group of composers associated with him, including Jack Beeson and John Kander. Moore had a big influence on a generation of composers through his work producing opera at the Columbia Opera Workshop. You may be surprised to learn that the workshop premiered operas by composers such as Britten, Menotti, Thompson, and Ward.

Posted by Michael Ching at 1:26 PM No comments:

Since its founding by composer James Stepleton, the Douglas Moore Fund has provided a fellowship to five aspiring opera/music theater creators. To date, five composers have received the fellowship, including Aleksandra Vrebalov, Gabriel Gould, Eli Marshall, Dan Visconti, and Zachary Wadsworth.
The fund is named to honor Douglas Moore and a group of opera and theater composers associated with him. In addition to his own work, Moore was helped a generation of composers through his work at the Columbia Opera Workshop.
The fund is currently concentrating its activities related to Moore's works.
The Moore Fund's chair is composer and conductor Michael Ching